Kiss Up the Arm 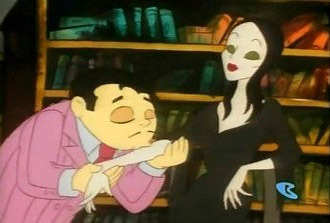 A comedy/romance trope in which a guy starts by kissing a woman's hand and works his way up her arm to her neck. Usually used to identify the man as either The Casanova or a pervert. Mostly a Dead Horse Trope nowadays, but can be found in many older works (particularly animated shorts).

Common reactions are shyness and stuttering, swooning, or slapping.