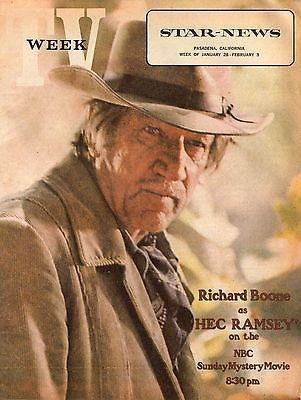 Hec Ramsey was a Western series that aired as part of The NBC Mystery Movie (it was the only element not set in the present day) from 1972–74. Mark VII Limited (Jack Webb's company) produced the show.

Richard Boone starred as Hector "Hec" Ramsey, a former Wild West gunfighter turned lawman who's keeping up with the times as the heyday of the cowboy is coming to an end and the 20th century is just beginning. He has developed a strong interest in the then-emerging field of forensics, and though he still carries a gun, his most important "weapons" were now fingerprinting kits, magnifying lenses, scales, and other equipment (often hand-made, by himself) which allow him to determine the real perpetrators of crimes with greater accuracy than has previously been possible.

Ramsey, having recently become expert with his new equipment, accepts the position of deputy police chief in the fictional town of New Prospect, Oklahoma. Arriving in town, he learns that the chief of police, Oliver B. Stamp (Rick Lenz), is a very young, very inexperienced lawman who needs lots of help. Fortunately, Stamp knows this, and after some initial friction, the two men develop a strong working relationship. They are often helped by Doc Amos Coogan (Harry Morgan), the town's physician and barber.