Film / Day of the Wolves 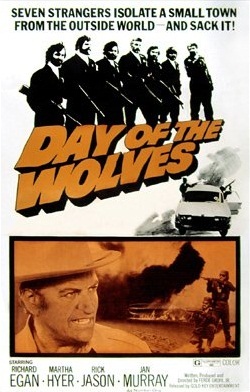 Day of the Wolves is a 1971 heist movie starring Richard Egan and directed, written and produced by Ferde Grofe Jr.

Richard Egan stars as Pete Anderson, the chief of police of the small western town called Wellerton. Anderson has a run-in with the son of a council official, who gets him fired. His warnings that the town is vulnerable to a criminal takeover were also considered scaremongering.

At the same time as this is happening, a group of thieves are being anonymously summoned to a ghost town in the desert by a criminal mastermind. Each of the thieves is promised a minimum of $50,000 for their participation in a heist, and arrives wearing a beard to disguise their appearance. The thieves are assigned a number (number #1 being the mastermind), and asked to wear gloves for the duration of the exploit, so as not to provide evidence that could lead back to them. They are shown a map of the town of Wellerton and told that they will fleece it. The criminals use the ghost town to train for the heist.

Pete's wife Maggie tips off Pete that the town is being invaded by criminals and he drives into town and starts a running gun fight with the wolves.

Day of the Wolves contains examples of: