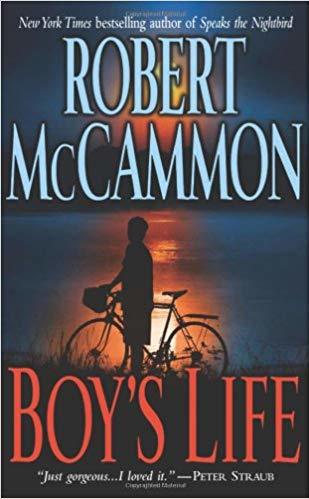 Cory Mackenson, age 12, lives in Zephyr, Alabama, a quiet town that has an odd air of magic to it. One day, while Cory is out with his father delivering milk, the two witness the aftermath of a horrific murder, the victim disappearing in a lake. Tom Mackenson is deeply haunted by this, and Cory attempts to find clues to the identity of the murderer.

...and yet, despite the above event, this book is truly about the life of a boy. The murder provides a story arc. a conflict and a climax, but Boy's Life is, at its core, a Slice of Life novel.

One of Robert R. McCammon's best known books, and winner of the 1992 World Fantasy Award, Boy's Life is something along the lines of "To Kill a Mockingbird, but with a 12-year-old boy in the 1960's.

Not to be confused with the official magazine of the Boy Scouts of America titled Boys' Life or Tobias Wolff's "This Boy's Life.".