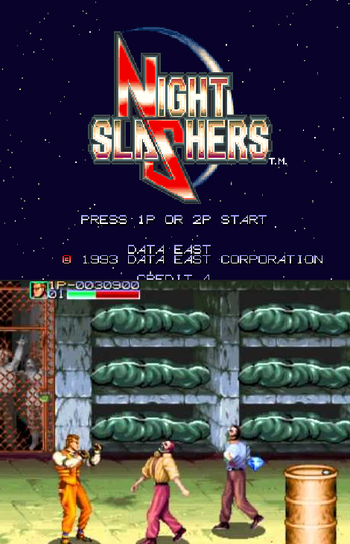 It's been three months since the city became overrun by monsters, mutants and the walking dead. With armies overwhelmed and supplies running low, it seems the humans are running out of hope... It's only up to three brave hunters to stop this madness once and for all.

Night Slashers is a 1993 arcade beat 'em up developed by Data East, and it's notable for two reasons: 1) It's one of the few beat 'em ups that deliberately utilize campy horror tropes, featuring all-favorite monsters such as zombies, werewolves, and psychotic killers. 2) Although beat 'em ups are never far from violence and blood, Night Slashers is surprisingly graphic, not afraid to show intestines spurting out as the enemies fall down. These made Night Slashers a class of its own, and it became one of the most sought Data East games after years.

Forever Entertainment, the same people behind Panzer Dragoon Remake and the upcoming Panzer Dragoon II Zwei: Remake, are working together with G-Mode to make a remake of this game for all consoles. No release date has been announced yet.