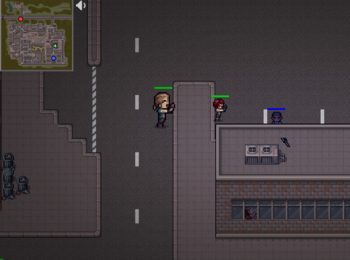 Best snipers are those that shoot straight through a building's roof!
Nightpoint.io

is a 2017 Web Game by Šarūnas Visockas, played from a top-down perspective. In it, the players are spawned into a city full of infinite hordes of pixelated zombies, and will have to keep destroying them to survive. As they earn points in this manner, they'll unlock new weapons, and get to raise their stats.
Advertisement:

Players can also try to help each other, but in practice, they are far more likely to shoot at each other aggressively, in order to reach the top of the leaderboards. If you play Teams mode, you are also worked to work together with half of the players to capture the other team's flag. This is pretty much it.

, which lacks zombies, but reuses nearly everything else from this game.