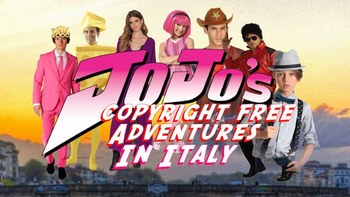 is essentially The Abridged Series of JoJo's Bizarre Adventure, except, instead of using footage from the anime or manga, the author decided to give a middle finger to Youtube's copyright system by using stock images, text-to-speech voices, and midi-based recreations of music from the show.
Advertisement:

The end result is a hilarious recreation of the series that also takes rather creative liberties with the source material, including giving most of the protagonists slightly different abilities.

By order of release, the series are: