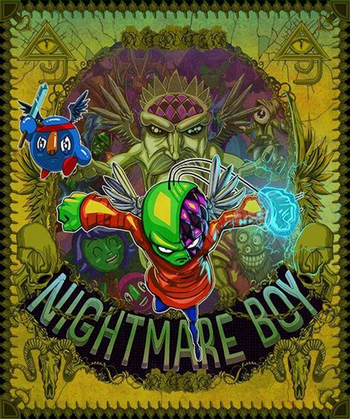 One night, a boy named Billy is minding his own business when, just before going to bed, A wizard monster named Balder randomly manifests himself out of Billy's pillow and attacks him, wanting to transform him and brainwash him. Through this, Billy gets a one way trip to a realm of nightmares, but doesn't get brainwashed for some reason. Balder leaves promising to return and finish what he started, and Billy goes out to explore, learning he's been transformed to look like a diseased prince, and that Balder plans to rule the world of nightmares using other children he has dragged there for power. Billy swears to defeat Balder and free his captives before the damage can be done.

Nightmare Boy is a Metroidvania style Platform Game, developed by The Vanir Project on the Unity engine, and published by Badland Games on October 25th, 2017 for Playstation 4, Xbox One and PC. It was also ported over to the Nintendo Switch on January 16th, 2018.