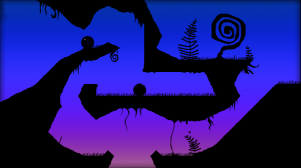 NightSky is a Puzzle Platformer by Nifflas, creator of Within a Deep Forest, Knytt, Knytt Stories, and Saira. It was originally released for PC on January 6, 2011, and then ported to Nintendo 3DS on October 25, 2012 and to iOS devices on March 14, 2013.
Advertisement:

You play a black orb that can roll, but cannot jump. You must make use of Ramp Jumps to traverse the environment.Each level is three screens long. Most of these levels use the first screen as an empty 'introduction' screen, feature the majority of obstacles in the second screen, and include a pretty background scene in the final 'reward' screen. This rhythm is used often enough that deviations from this norm are surprising.

In each level, the ball has access to at most two powers, controlled with the A and S keys. The teal power makes the ball spin very fast, the orange power gives the ball a firm grip on the ground, the purple power lets you reverse gravity, and the rare white power is automatic and prevents you from moving for the entire level — you can only roll under the force of gravity or by being knocked by a moving object.

In addition to controlling the ball, you can also remotely activate machines on the same screen by pressing Enter. These machines typically drop physical objects that you must carefully interact with to progress.

And, some levels feature the ball inside a ground vehicle or flying machine. You can control the machine by rolling in either direction.

The game has a free demo, which can be downloaded here