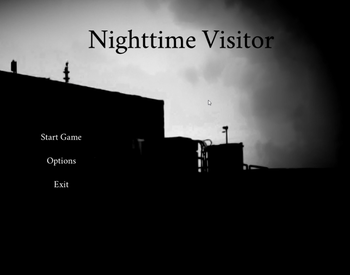 Nighttime Visitor is an quick horror game for PC, created by raincoil with Unity for Ludum Dare 39 jam in July 2017. The premise involves you, the player character, staying late at work at your office building when you suddenly get an unnerving phone call from someone called "Alex" who states his intention to find you and kill you.
Advertisement:

You have no weapons on you, and every door is locked. All you have is your cell phone, which you and "Alex" use in a game of Marco Polo by ringing up each other's phones to find each other's locations. You must evade "Alex" and find your way to the building's exit.

The game can be freely downloaded here

This game contains examples of tropes such as:

Hey man, this is TV Tropes. I heard you were reading late tonight, so I just wanted to say that I'm, uh, GONNA RUIN YOUR LIFE! HEHEHEHEHE!