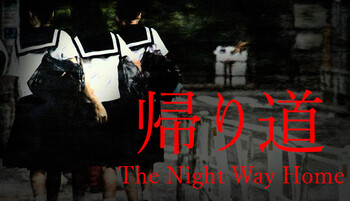 The Night Way Home is a Survival Horror Video Game by Chilla's Art.

Yesterday, a teenage girl by the name of Setsuna Funamori, who goes to the next school over from yours, has vanished. She was on her way home from what people believe to have been an extracurricular activity around 8:00 PM, and hasn't been seen since. Her last known location was the train station. Rumour has it domestic violence was involved.

You are Rina, a girl who heard rumours about Setsuna's disappearance. While on her way home, Rina goes to the subway and meets a girl crying in the restroom. She tries to talk to her, and the girl asks that she not leave. She even turns around and grabs Rina's hand.

Then Rina comes to on the bathroom floor. She soon finds herself in a very dark world.