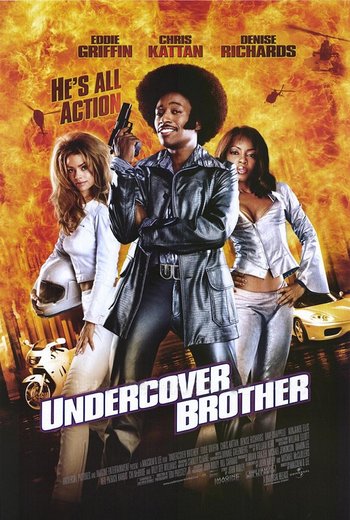 Undercover Brother is a 2002 American satirical action comedy film, based on a Web Animation series of the same name. It spoofs the Blaxploitation genre as well as Spy Fiction, such as the James Bond series. It was directed by Malcolm D. Lee and stars Eddie Griffin, Chris Kattan, Denise Richards, Aunjanue Ellis, Dave Chappelle, Chi McBride, and Neil Patrick Harris.

We start with a black U.S. Army general named Warren Boutwell (Billy Dee Williams) who, in the beginning, looks like a good, respectable possibility for a black president. No scandals in his past at all.

But a white Chessmaster known only as "The Man" (Robert Trumbull) and his evil organization use a drug on the general to brainwash him. Right when he's supposed to be announcing his candidacy, he gives up his dream of politics to run a chain of fried chicken restaurants. It's evil fried chicken, too, but we don't learn that immediately.

The good secret organization, The BROTHERHOOD, needs to stop this before it goes any farther. But to do that, they must call the great Blaxploitation hero Undercover Brother (Griffin). Undercover Brother is stuck in The '70s, but he knows kung fu.

Undercover Brother is asked to infiltrate the evil Organization undercover. He is given a watch that sprays hot sauce to fight off the potential evil of mayonnaise on white bread. But, once on assignment, he meets an incredibly beautiful blonde (Richards) who appears to be trying to befriend him, and things go bad...