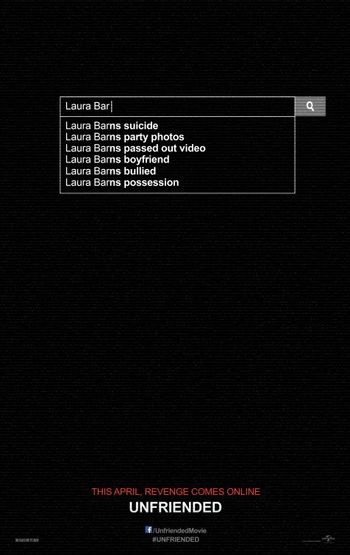 Online, your memories last forever.
But so do your mistakes.
Blaire Lily: Please, Laura, we are not bad people... we are good people.
Laura Barns: Really? Are you sure about that?
Advertisement:

The entire film is set one to two years after the death of Laura Barns, where a video was posted of her passing out drunk at a party and soiling herself. Needless to say, a lot of people ridiculed her, driving her to commit suicide. Now six students - Blaire Lily, Jess Felton, Val Rommel, Ken Smith, Adam Sewell, and Mitch Roussel - get together on Skype, with a seventh anonymous user posing as Laura Barns.

At first, they think the user is a troll using a dead person's account. But they soon realize they're dealing with something worse. Something beyond the grave. If they ever log out or stop talking, they'll die. As the chat progresses, the truth about who posted the video begins to emerge and other secrets are revealed that test their friendship.

A sequel titled Unfriended: Dark Web was released in 2018.