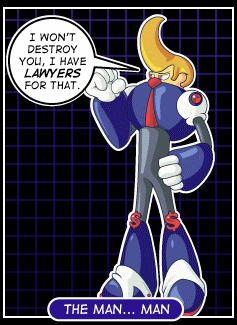 Even Dr. Wily answers to him.
"I think you'll find that I'm in charge everywhere."
— The Man, Kingdom of Loathing
Advertisement:

The Man is a much less specific villain than The Syndicate or the Ancient Conspiracy, a personification of establishment itself, even if no one person or organization makes up that establishment. You've heard of him. He controls everything. Emperors, ancient conspiracies, gods, Absurdly Powerful Student Councils. They are all under his control according to the resident New-Age Retro Hippie.

This trope does not refer to any man, it refers to the Man. Often, this is just a stand-in for capitalism and its many contradictions that benefit only a certain few.

It can overlap with The Man Is Keeping Us Down and The Man Is Sticking It to the Man. Rarely involves The Man Behind the Man, unless the said person was made explictly clear to be the one who created the personification of establishment on the first place.