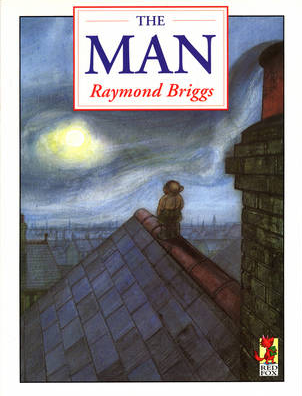 Boy: This is a dream. Yes, I know I'm dreaming. There's no such thing as people six inches tall!
Man: Seven inches, thank you very much! Just over seven to be precise. 18 centimetres exactly.
Advertisement:

A 1992 Graphic Novel for children, written by Raymond Briggs, who also wrote The Snowman.

A 12-year-old boy named John wakes up one morning and finds a tiny man in his bedroom. Known only as Man, he insists on staying, so John spends the next few days grudgingly waiting on his new guest. The Man is opinionated, messy, demanding and manipulative, with a fondness for specific brands of tea bags, milk, bread and especially marmalade.

The Man soon begins to outstay his welcome, but he and John nevertheless form an Odd Friendship. All the while, John tries to keep his guest a secret from his parents, who blame him for the Man's antics, and are bemused by their son's recent odd behaviour; buying his own expensive food, singing along to the morning service, arguing with himself, and coating the house with marmalade.

It was later released as an audiobook, with Michael Palin voicing the title character.