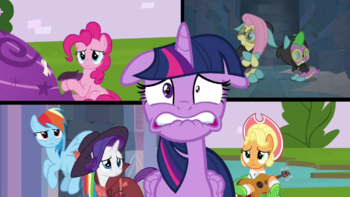 "No lookout, no distraction, and no word from the ponies inside! I'm starting to think this whole operation might be a giant flop!"
— Twilight Sparkle
Story by Tara Strong, Ashleigh Ball, Andrea Libman, Tabitha St. Germain, Cathy Weseluck
Written by Nicole Dubuc & Josh Haber
Advertisement:

Spike delivers a message from Canterlot to Twilight from Shining Armor, challenging her to a Sibling Supreme contest. Twilight explains to a confused Starlight that as foals, she and her brother constantly competed to do as many good things as possible and earn gold stars from their parents. The high scorer at the end of each week won the title of Sibling Supreme and a tinfoil crown to wear. Twilight and Spike race off to Canterlot, leaving Starlight in charge of the School of Friendship.

Twilight returns to Ponyville and brings her friends to help out with the plan. They develop a scheme where Pinkie Pie would distract the guards to allow Twilight and Applejack to sneak into the castle through a sealed-off tunnel, while separately, Rainbow Dash and Fluttershy would come in via above, grouping with Rarity with a guard's medallion to access the throne room. There, Fluttershy would use her animal skills to tame the last obstacle, angry geese, so Twilight can get the crown. Just then, Spike gets another letter from Shining Armor boasting that he has anticipated Twilight's entire plan. Rarity suggests another route: letting them make plans completely different from their own personalities to keep Shining Armor and the guards on their toes. This includes having Applejack distract the guards with the "final" performance of "Apple Chord", AJ's Country Music star alter ego; having Pinkie take Fluttershy and Spike to the castle via balloon, and then keeping watch (from outer space); using Rarity and Rainbow Dash to suss out where the secret tunnel is from a seedy juice bar; and having Fluttershy and Spike as spies to them steal the crown. The plan further involves Twilight simply not being part of it and seen in public, so that she has an alibi.

The new plan quickly goes afoul. The balloon suffers a leak after Pinkie drops off Fluttershy and Spike, interfering with AJ's "Apple Chord" performance. The seedy juice bar is closed, but while the secret entrance is soon located, they find that Luna has placed Zephyr Breeze to guard it, and Rainbow Dash reluctantly uses his interest in her to distract him so Rarity can reopen the tunnel entrance. While Fluttershy and Spike get inside, they fall into a trap door near the thrones, but Rarity and Rainbow Dash free them while wandering through the underground tunnels in search of a way out. Ultimately they regroup, and Spike suggests that maybe since this plan didn't work, they fall back on Twilight's original plan, even if Shining Armor will be expecting it.

To their surprise, this plan goes out without a hitch, but just as Twilight gets to the throne room to get the crown, Shining Armor, Celestia and Luna appear, having been waiting for them. Twilight complains as Shining Armor taunts her, but then Spike reveals to all that he has the crown. Spike reveals that he had been working with Luna as an inside man, as Luna was also taken aback that Celestia didn't take her input into account. Luna had taken steps to assure that Twilight's original plan would work, getting everyone in the throne room at the same time so that Spike and Luna can make the big reveal. As Celestia goes off and half-heartedly apologize to Luna, Twilight and Shining Armor agree that Spike is the true Sibling Supreme and give him the crown.