Recap / My Little Pony: Friendship Is Magic S8 E17 "The End in Friend" 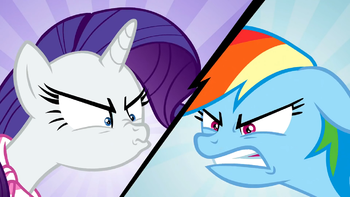 *I guess we're just not friends anymore!!*
"You guys have nothing in common. How can you be friends?"
— Gallus
Written by Gillian M. Berrow

Starlight Glimmer surprises both Rainbow Dash and Rarity by inviting each one to help Twilight Sparkle teach a class on compromise and friendship without telling the other. After explaining to the students that they can spend time together despite their differing interests, Twilight lets them leave to enjoy a day off — only for them to immediately start arguing over what to do.

As a practical demonstration, Twilight invites the class to watch Rainbow and Rarity spend the day. A game of buckball is ruined when Rarity gets so caught up in creating new, improved uniforms that she forgets to keep an eye on her team's goal basket, and Rainbow loses her patience while Rarity picks out a set of glittery boots at the shoe store. The final straw comes when Rainbow accidentally smashes the gems Rarity has been collecting from a cave, and the two declare their friendship to be at an end.

Starlight tries to help them find some common ground by having them read each other's favorite novels; Rainbow is assigned one of Rarity's Shadow Spade mysteries, while Rarity has to read one of Rainbow's Daring Do adventures. However, they both spend their time ridiculing the stories and Rainbow admits she didn't read hers. Starlight leaves during the argument, but returns with news that Twilight needs their help to find the stolen Amulet of Aurora. As Rainbow and Rarity investigate, Rarity admits that she didn't read her book either, sparking fresh anger between the two.

Their search leads them to a swamp, which Rainbow determines is too deep and hazardous to swim or fly across. Rarity builds a raft so they can reach the far shore, where they encounter a giant toad-like creature called a bufogren, with a soft speaking voice, very sensitive ears, and terrible breath. In order to get close enough to question it, they feed it a magical breath freshener concocted from mint leaves and a tuft of cloud. The bufogren tells them that it saw the Amulet being taken up a mountain, and Rainbow carries Rarity up to a door set into the rock face. Rarity picks its lock with the extendable stiletto heel on one of her boots, and the two apologize for belittling each other's interests.

The door leads to a passage whose other end is hidden behind a trophy case in the School of Friendship. The culprit turns out to be Spike, who had been working with Twilight and Starlight to create a situation that would remind Rainbow and Rarity of their friendship. To end their day, they decide to go shopping together so Rainbow can get some new buckball gear and Rarity can outfit herself to cheer her friend on.