Recap / My Little Pony: Friendship Is Magic S9 E5 "The Point of No Return" 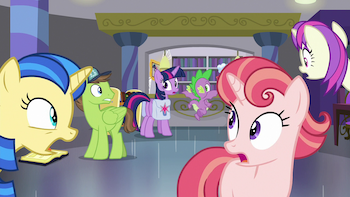 Twilight Sparkle, not returning a library book? The horror!
"I've never turned in a book even a minute late! And this one has been overdue since I left for Ponyville!"
— Twlilight Sparkle
Written by Gillian M. Berrow

Princess Celestia sends Twilight a box with some of the items she had left from her quarters after she had moved to Ponyville. While many of them bring back good memories, Twilight realizes one of the items is a book she borrowed from the Canterlot library and never returned. She immediately starts to panic, as she had long been the library's best book-borrower, and knows this will ruin her reputation. She and Spike immediately set off for Canterlot to return the book.

Twilight hopes to quietly return the book to Dusty Pages hoping to clear up the matter with her librarian friend, but finds a new librarian there. As Twilight dallies, Spike goes ahead to return the book, and they are told that it is so overdue they need to go to talk to First Folio in the basement of shame to discuss the fee. Unfortunately, First Folio is out to lunch. Twilight insists they go look for her, as to stop incurring fees. By chance, they happen upon Moondancer who is having lunch with First Folio. First Folio recalls that Dusty had to leave her job as a librarian after some pony failed to return a book. Now aware she probably cost Dusty her job, Twilight sets out to find Dusty to return the book to her as to give Dusty her old job back.

Twilight and Spike go to Dusty's old house in Canterlot, but its current owner only knows she long moved out to someplace with Silver in the name. Twilight and Spike visit several places in Equestria and eventually end up at Silver Shoals, a retirement community. After confirming she lives there, they start trying to track her down, but keep missing her as she goes from activity to activity. Eventually they catch up to her, and after reuniting, Twilight presents Dusty with the book. To her surprise, Dusty refuses to accept it, wanting nothing to do with her old job, and walks off.

Twilight mopes for a bit but Spike encourages her to talk to Dusty again, and find out what happened in the past. Finding her at a mock food fight, Dusty calls for a time out and spends a few minutes to talk to Twilight. She tells her that when Twilight didn't return the book, breaking her own perfect record as a librarian, she realized that her striving for perfection was holding her back, and she instead started to try new things, even knowing that she might fail, and has been enjoying her life greatly after that. Dusty then points out that the book that Twilight's been trying to return, which Twilight had never read, is about the impossible pursuit of perfection, a lesson Twilight takes to heart.

Back at Canterlot, Twilight and Spike meet with First Folio to return the book, finding that the late fee was capped after a month and only 28 bits, though they will have to take down Twilight's picture as the perfect book-borrower. Since the library has already replaced the book with a more recent edition, Twilight is allowed to keep it as a souvenir of her adventure.