Manga / Me & My Brothers 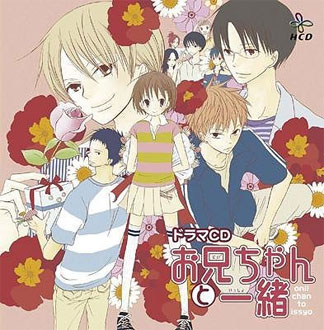 Me & My Brothers (Onii-chan to Issho) is a shoujo manga written and illustrated by Hari Tokeino, which ran in LaLa from 2004 to 2009. It was licensed in English by Tokyopop.

The story revolves around Sakura Miyashita, a second year middle school girl whose grandmother, who she lived with, recently passed away. Sakura then spent her days alone in her grandmother's big house until one day, she came home to find four strange men she has never met before living there! They explain to Sakura that until she was three years old she had lived with them, along with their mother and father.

There's the oldest brother Masashi, a romance novelist who crossdresses when he isn't writing. The second brother is Takashi, who becomes a teacher at Sakura's junior high. The third brother is the brash Tsuyoshi, a high school graduate and ''full-time part-timer" with a dream of owning his own shop. The fourth and youngest brother is Takeshi, a current high school student.

At first Sakura finds their presence to be intrusive, and is especially alarmed when she accidentally learns that she and her brothers are not blood related. Eventually, she grows to appreciate their dedication to her as a little sister and values all of their moments together as a family.

As time goes on, Sakura graduates junior high and enters highs school. She finds herself becoming even closer to one of her brothers ... and not as a sister.