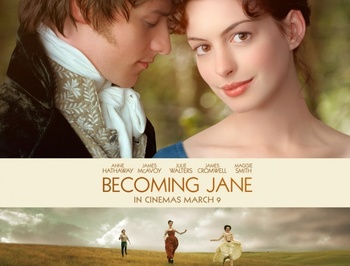 She has yet to truly become Jane. She, as Jane, is so very becoming.
Advertisement:

Becoming Jane is a 2007 British-Irish biographical Rom Com drama. It depicts the formative years of the English author Jane Austen and her brief but passionate love affair with Thomas Lefroy. American actress Anne Hathaway stars as Jane Austen, while her romantic interest Tom Lefroy is portrayed by Scottish actor James McAvoy. It was directed by Julian Jarrold.

The film is in part based on the book Becoming Jane Austen by Jon Hunter Spence who was hired to work as historical consultant for the movie. The screenplay was co-written by Sarah Williams and Kevin Hood. They tried to piece together facts and gossip about Jane Austen into a neat love story. According to Hood, they wanted to incorporate "what we know about Austen's world from her books and letters".

The have film presents Jane Austen's relationship with Tom as a key influence on her writing, suggesting that it directly inspired her most famous work Pride and Prejudice and her other great novels.