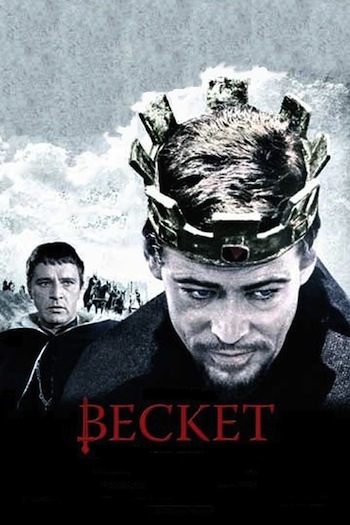 Becket is a 1964 British film adaptation of the French play Becket or the Honour of God by Jean Anouilh, directed by Peter Glanville and starring Peter O'Toole as Henry II and Richard Burton as Thomas Becket, the Archbishop of Canterbury.

In 12th-century England, King Henry II is at odds with the church because he spends most of his time hunting, drinking, and womanizing with his Saxon friend Thomas Becket, who also advises him on matters of state. Following the death of the Archbishop of Canterbury, Henry appoints Becket as his replacement, despite the protests of most of the clergy and Becket himself, who claims that he cannot serve both God and the king. Becket takes his new position seriously and finds himself in opposition to Henry's interference in the church. Henry becomes furious because he mistakenly believed that installing his best friend as archbishop would give him control of the church. He banishes Becket from England and now the two friends become mortal enemies.

Four years later O'Toole would play Henry II again as an older man in the film adaption of the play The Lion in Winter with Katharine Hepburn as his estranged wife Eleanor of Aquitaine.