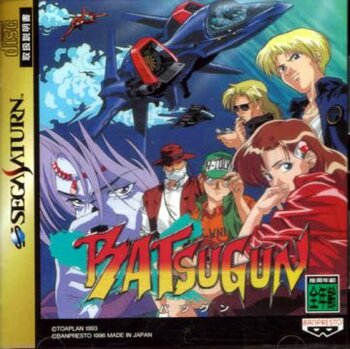 Batsugun is a Bullet Hell Shoot 'Em Up made by Toaplan in 1993, and their final one as well before their bankruptcynote although not their last game overall; that would be Snow Bros. 2 in 1994. You play as one of six fighter pilots of the Skull Hornets squadron, piloting amphibious planes to stop a global takeover operation by King Renoselva A. Gladebaran VII.

An Updated Re-release, Batsugun Special Version, was released in 1994, effectively serving as an Arrange Mode with many differences. Both versions of the game were ported to Sega Saturn in 1996, ported by Gazelle (one of Toaplan's child companies after they closed down) and published by Banpresto. Batsugun received another home port in 2022 as part of Sega's Astro City V microconsole

. A port to the exA-Arcadia hardware platform, BATSUGUN EXA LABEL, is set to be unveiled at Japan Amusement Expo 2023