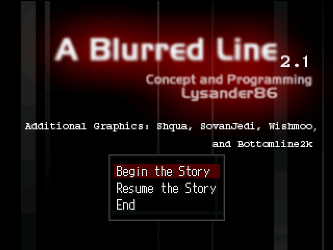 A freeware cyberpunk RPG made with RPG Maker 2000, A Blurred Line

follows the story of Talan, a regular blue-collar worker at a factory run by the powerful Delcentric. When the Director of the Agency is assassinated after giving a speech at the factory Talan works at, Talan finds himself the prime suspect and goes on the run. It's then up to Talan to evade his pursuers while getting to the bottom of the mystery at hand.

The game is widely considered (within the RPG Maker community) to be one of the best games made with the program, due to its compelling storyline with meaningful non-linearity. Unfortunately, the game remains unfinished. Although the first two parts are complete, the final chapter, Line's End, was teased for a 2002 release, but since then, there has been no word on it.

Tropes featured in A Blurred Line include: