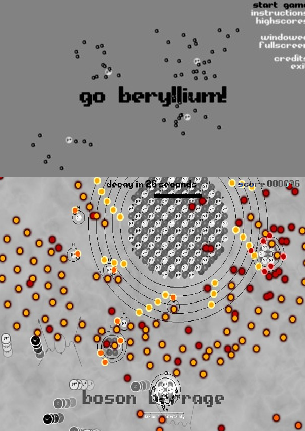 Go Beryllium! is a 2013 freeware Shoot 'Em Up game for PC and macOS that operates on a borderline Bullet Hell level. The settings takes place in an atomic scale. The player plays as a beryllium atom shooting photons at other atoms. The player has got only one life with the health bar going down when hit and it also goes down slowly on its own. To regain health bar, player must collect quarks from destroyed atoms. When health bar goes full, a powerup is received.
Advertisement:

Tropes in Go Beryllium! include: