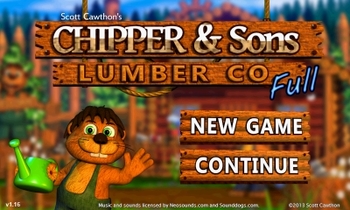 Are you ready to have a chipper time?
Advertisement:

Chipper & Sons Lumber Co. is a construction and management game produced by Scott Cawthon in the days before Five Nights at Freddy's. In this happy little game, you play as Tyke, a young beaver who is just starting out in the lumber business, who must chop down trees, collect and sell wood (allowing your father, Chipper to turn it into lumber at his mill), and buy or find various items to make your business easier to run.

The game was made in 2013 for iOS and Android, and came in two versions, Full and Plus. The Full version is free while the Plus version is a paid app that allows you to get special items early in advance. The game was also pitched to Steam Greenlight, but it was pulled a day later after Scott received scathing criticism regarding the art style and how the characters looked like "animatronic dolls". Those same critiques was later used to make Five Nights at Freddy's, the game that put Scott on the map for good.

After many requests, Scott finally released a PC port on GameJolt, which can be played here