Video Game / The Closer: Game of the Year Edition 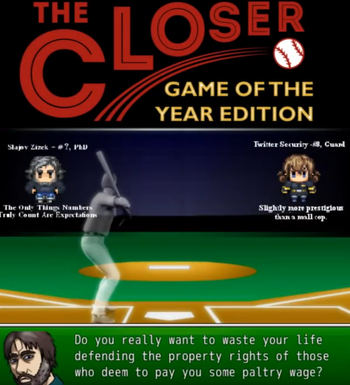 The title screen, and the encounter with aforementioned Slovenian philosopher.

The Closer: Game of the Year Edition (or The Closer for short) is a freeware RPG developed in RPG Maker XP by Redbird Menace and published by Thesis Games in 2015. It weaves an absurdist and existential narrative around a major sport, not unlike The Tim Tebow CFL Chronicles or 17776. Yet the sport that serves as the backbone of the game's plot is not gridiron football but baseball.
Advertisement:

It's Game 6 of the 2015 World Series, and the New York Yankees are leading 3-2 against the St. Louis Cardinals. You play the role of the Closer, an ace reliever of New York, who's just been called to the mound to finish off the championship despite still being a young rookie. However, this soon proves not to be the case as St. Louis's power hitter Carlos "The Machine" Rodriguez arrives at bat and completely smashes the ball out of the park.

Crushed by this slip-up and the ensuing loss that extends the series to a Game 7, the Closer soon finds out that everyone's figured out his slider, rendering it nothing more than a weak, predictable meatball throw. Thus, his pitching coach Moose drops a bombshell on him: in order to win Game 7 the following day, he will have to remake himself as a pitcher. And that means learning a new pitch or two. All pretty normal stuff...until Moose suggests the optimal way to learn new pitches in such a short time is to do pencil-and-paper crossword puzzles.

And then a Slovenian philosopher gets involved.

And then personified social media. And that's not even halfway through the rabbit hole!

The game is available for free on Redbird Menace's itch.io page

.* You can also read an LP of it on the LP Archive

, though it is highly recommended to play the game to completion first before reading past update XII. Not to be confused with either the TNT crime drama or the Game of the Year Edition trope.