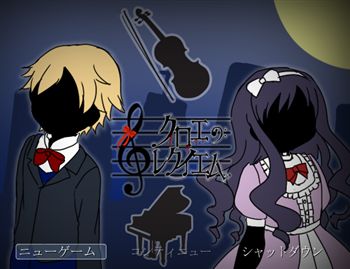 Cloé's Requiem is an RPG Maker horror adventure game released in October 2013 by Nubarin and Nanashi no Chiyo of the group Buriki Clock, the same people who made Fantasy Maiden's Odd Hideout. It follows the experiences of a twelve-year-old boy named Michel D'Alembert, a violinist who is extremely talented, but hates training and is very lazy. One day, he runs away from his family and ends up in a strange mansion. There, he meets a young girl named Cloé, who tells him that she has a curse, and tasks him with repelling it.

Cloé's Requiem has disturbing themes such as murder, incest and sexual abuse.