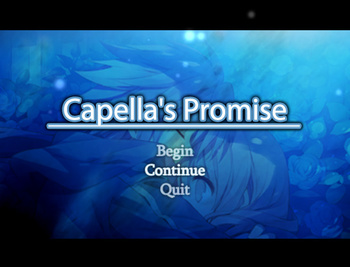 Capella's Promise is a 2014 freeware PC game, made by Plainsoft in RPG Maker VX Ace and translated to English by vgperson.
Advertisement:

Two slave traders, Velk and Thiana, are paid a huge sum of money to look after a wheelchair-bound girl, Shena. Unfortunately, this deal turns out too good to be true when the Emissaries show up demanding to take Shena, who turns out to have a huge bounty. Thiana is arrested, but not before telling Velk to escape with Shena into the outside world, which will be quite challenging considering neither have any experience with life outside slave markets. During their journey in Ilnacia, Velk and Shena will meet other colorful allies, including others with unexplained bounties on their heads, driving them to discover the truth behind the government's shady behavior.