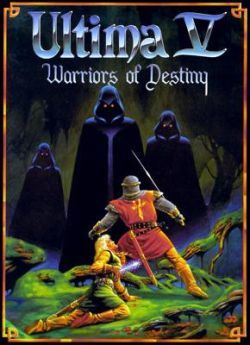 Thou shalt humble thyself to thy superiors, or thou shalt suffer their wrath.
—Lord Blackthorn's Ethic of Humility
Advertisement:

Ultima V: Warriors of Destiny is an 1988 video game by Origin Systems. Things start getting Darker and Edgier. Since the the Avatar's success in Ultima IV, Britannia has been busy. It's created a new system of government to act next to Lord British, the towns and city-states are starting something of a renaissance in ship-building, farming, road-building, and even lighthouses.

And while they're at it, the Government decides to do something about those pesky Dungeons. They seal them up with magic wards so that nothing can enter or leave. While they're at it, let's raise the Codex out of the Abyss so that people don't have to go through that dungeon filled with Gargoyles Daemons in order to get the virtue.

This was, perhaps, the start of the problem. Lifting the Codex out of the Abyss left a huge...hole where the Abyss used to be. (Don't overthink it.) This "Underworld" was filled with beasts far worse. This lead to the decision to finally put Lord British's invincibility to good use and have him lead an expedition to check this out. The party he is in is attacked by 3 spectres clad in Black Cloaks called the Shadowlords, and even Lord British vanishes.

In the wake of his disappearance, the Regent Blackthorn takes tyrannical control of the government that had been given so much power, and through him, his forces, and the Shadowlords themselves reign supreme in Britannia. ....where did this Darkness come from? And where is Lord British? It's time for the Heroes of Olde to assemble again. It's time for the Warriors of Destiny.