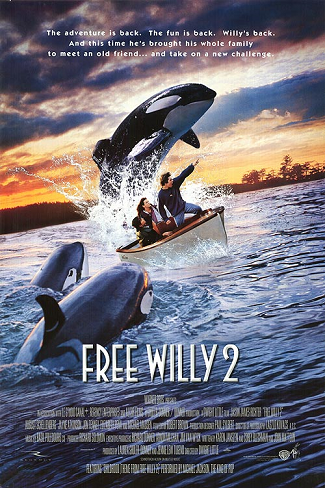 "Years ago, [Jesse] forged a friendship out of loneliness. Now, theirnote Willy and his family survival will depend upon that bond."
— Promo
Advertisement:

Free Willy 2: The Adventure Home is the 1995 sequel to Free Willy, directed by Dwight Little and featuring most of the main cast from the first film.

Two years have passed since Jesse helped release Willy back into the wild, and he and his adoptive parents are prepared to go on a camping trip to San Juan Island. Before they can go, Jesse is informed that his mother has died and has left behind Jesse's half-brother Elvis. The two do not get along, but that doesn't stop the vacation. Once there, Jesse reunites with Willy, who has been happily reunited with his family. But when an oil tanker ruptures and spills its contents out into the bay, Willy's sister Luna gets sick and beaches herself. With Luna's life in the balance, Jesse must help her recover and reunite Willy's siblings with the rest of his family.