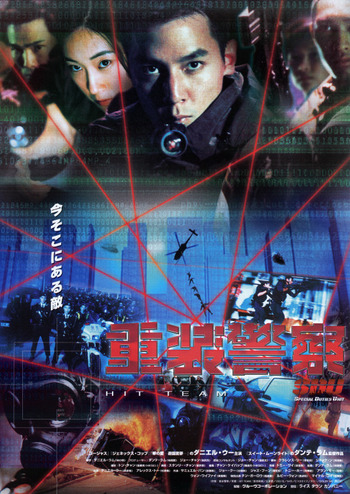 "The comrades of yesterday. The enemies of today."
— English Tagline (Also used in the Japanese version)
Advertisement:

Hit Team (重装警察; Chung Zhoong Ging Chaat in Cantonese and Chong zhuang jing cha in Mandarin) is a 2001 Hong Kong action thriller movie directed by Dante Lam, starring Daniel Wu and Alex To with supporting roles from Jo Kuk, Samuel Pang, Chin Kar Lok and and Michael Lui. It had a IIB rating when it was released throughout Hong Kong and had a budget of HKD$2,265,354.00.

The movie takes place during a raid on a triad gang that officer Chong Chin Ho was involved in during an undercover op. During the raid, Chong got hit in the spine and was rendered disabled by the Hong Kong Police Force. Despite efforts led by officer Don to give him some benefits due to being discharged under serious injuries, officials from the force did not listen to requests to help him with his medical condition through benefits. Rather, they blame him for getting himself injured by not following protocol when the shooting started. This forces Don and his friends in the HKPF to resign in protest, except for one who stayed behind to serve as the inside man via the Special Duties Unit, and take on the triads by robbing their underground banks to pool enough funds to get Chong a flight to Switzerland. Unfortunately, Don's first action results in killing the Triad 49ers in the raid after one of them gets unmasked during a fight.

The Criminal Investigation Bureau investigates the shooting and summons Inspector Chung Chau of the Surveillance Support Unit's D Team (aka Hit Team) to investigate the incident. He later learns of Don's involvement in the case, but not before Don and the other rogue officers hatch a plan to launch another score and take on a triad-owned armored car in order to get enough money and fund Chong's trip.

Of course, The Triads and the Tongs realize that they've been hit and placed their men nearby to ensure that Don doesn't get away without a fight.

The official Hong Kong website can be accessed here