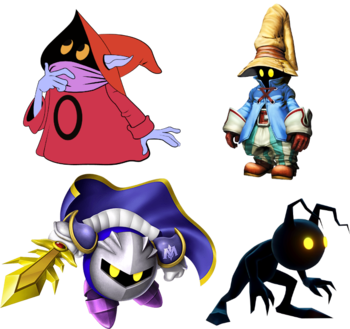 Orko, Vivi, Meta Knight, or a Shadow, you know the look when you see it... assuming they don't see you first.
Advertisement:

An odd sort of combination of By the Lights of Their Eyes, The Faceless, and maybe Living Shadow, depending on the character, this is when someone is depicted to have a dark head (and sometimes whole body) with contrasting glowing eyes.

The exact cause of this can vary. Sometimes the character's face and body is hidden behind robes that make it difficult to tell what they look like under the hat/helmet/whatever. Other times the character really does have jet black skin with glowing eyes. Whether or not we ever get to see what the character actually looks like depends on the work.

This serves a purpose of making a character seem more mysterious or unusual compared to other characters who have their face be visible. If the're on the side of the heroes, they can be portrayed as cute but powerful characters who posses abilities their partners may not fully understand, but nonetheless are cherished for their abilities and personality. By contrast, if they're one of the villains, expect some similarities to the Grim Reaper, unless they're Adorable Evil Minions. Unlike their heroic counterparts, villainous examples tend to be taller.

Upon death, these characters may have their Eye Lights Out.

Compare Glowing Eyelights of Undeath, where these eyes are inside the eye sockets of a skull, and Fade Around the Eyes, which temporarily induces a similar visual effect during a fade-to-black. Black Bead Eyes are the inverse of this trope. Not to be confused with either Conspicuous Trenchcoat, which sometimes invokes this trope, or Face Framed in Shadow.