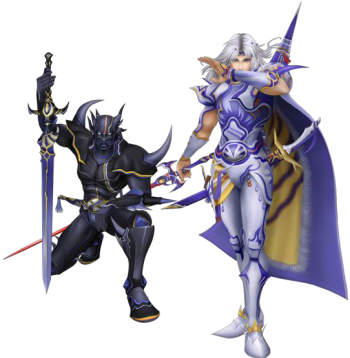 In epic Fantasy worlds, "subtlety" is forbidden from their tomes of legend. When there is a clear line between the forces of good and evil, conflict is inevitable. Conflict usually means combat and thus protection from the opponent is required. With protection comes the opportunity for Character Alignment-based fashion, because there is always time to look fabulous.

Heroic armor is often done in primary or bright colors, either reflective chrome silver or the purest of gold, their monetary wealth a reflection of their moral wealth. If worn by the protagonist or the king, it will have a Badass Cape flowing behind them connected from the collar and embroidered by the symbol of the nation or their House. If enchanted, the armor is capable of surviving any blow no matter how improbable and enhancing the wearer's capabilities as a fighter, with an equally enchanted Anti-Armor weapon capable of rendering it useless. Helmets are uncommon.

Evil armor is colored in dark, sinister colors, usually black and decorated in colors associated with villainy in context of the story like red or secondary colors. It can be reflective like it was carved from obsidian, or so rusted and aged that just putting it on could be a health hazard. They'll be covered in Spikes of Villainy because it is meant to elicit caution in all who see at, meant to look like it is as big of a danger to their opponents as their weapons. Typically worn by Tin Tyrants full-time or Evil Overlords during battle. Dialed up and that makes it Scary Impractical Armor. In rarer cases, the armor is cursed and it is what causes the bad behavior of the wearer.

Of course these prerequisites are not exactly mandatory for the trope to apply. The hero can wear dark, battered armor and the rich villain could have saved a pretty penny for a shiny suit adorned with flowers and feathers. Inversions and subversions are as likely, just as long as symbolism can be drawn from the disparity.

Compare Character Model Karma Meter, for when you can tell where a video game character sits on the Karma Meter from their appearance. Related to Armored Villains, Unarmored Heroes, Color-Coded Patrician, Elemental Armor, Good Colors, Evil Colors and Instant Armor.