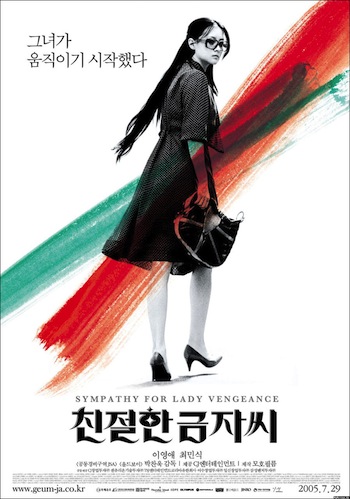 Sympathy for Lady Vengeance is a 2005 Korean thriller directed by Park Chan-wook, released in Korea under the title of 친절한 금자씨 (Kind-hearted Geum-ja). It's the final film in Park's Thematic Series on revenge, following Sympathy for Mr. Vengeance and Oldboy (2003).

Lee Geum-ja, a 19-year-old girl paying the price of some bad decisions, is blackmailed into falsely confessing to the murder of a child. After 14 years in prison, she emerges a cold, vengeance-driven woman, dropping the kind, gentle facade that had won her the friendship and loyalty of the other female prisoners. Using her connections formed in prison, Geum-ja sets into motion a plan 14 years in the making. Her goal is to punish Mr. Baek, the real murderer; however, even revenge may not be enough for Geum-ja to find redemption.