Another Story for Another Time 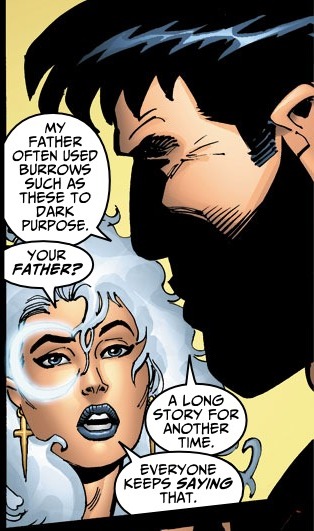 Sure they do.
Nasthalthia Luthor was not found. She had gone to ground shortly after introducing Lex to the two villainesses, intending to come out if he managed to be successful this time. She stayed undercover, was fired in absentia from her job as vice president of the San Francisco TV station for which Linda Danvers used to work, and, when the authorities learned of her part in the plot, was the benefit of an APB issued to all law enforcement agencies.
But they didn't find her. Kal and Kara both suspected that someday, they would.
Another tale, another time.
— Kara of Rokyn
Advertisement:

When someone gives an Exposition, they'll often mention something that pertains to a certain event. Questioning the character about it would elicit this response. The line is often used an obvious Sequel Hook, leaving it the sequel (or prequel or interquel or what have you) to actually show said story.

Compare the very similar It's a Long Story where the audience is already familiar with said events from a previous installment or episode, but it is a newcomer character that needs to be brought up to speed. In this case, the story is usually told in summary, even if reluctantly (and to explain to audience viewers who may be new, just missed or forgot that previous episode) while with Another Story for Another Time, the other party does not typically press the issue since it just may be a hook for another yet to be written installment. See also Noodle Incident.

Due to The Law of Conservation of Detail, this story may later turn out to be relevant. It can also be Left Hanging: even if the issue is never acknowledged, the simple existence of unmentioned stories that take place beyond the current one is a good trick for Worldbuilding.