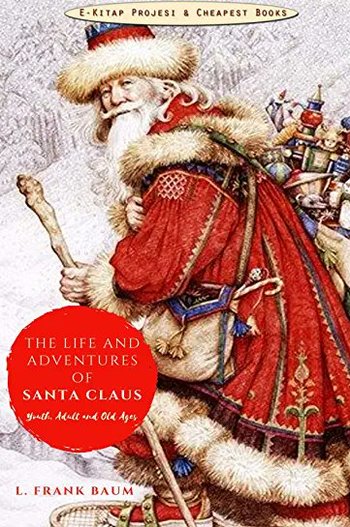 The Life and Adventures of Santa Claus, originally published in 1902, is L. Frank Baum's take on the origin story of Santa Claus.
Advertisement:

In the story, Claus was an orphaned baby discovered at the edge of the mystical Forest of Burzee (revealed to be located in one of the neighboring countries to the Land of Oz in later Baum books) by the Great Ak, Master Woodsman of the World and the ruler of the immortals dwelling within the woods and is placed in the care of the lioness Shiegra and the wood nymph Necile, who names the baby Nicolas. When Nicolas comes of age, Ak takes him on a journey through the human world where he discovers the poor and miserable state of human society and the children. Resolving to make a positive impact on humanity, Nicolas finds his calling in bringing joy to children through toymaking. However, monsters called the Awgwas oppose Claus's efforts to bring joy to the children that they torment, leading to Ak and the immortals to intervene. The evil forces are successfully routed and Nicolas, now going by Santa Claus, is able to freely continue his work until old age begins to catch up with him. Recognizing the positive impact Claus has had on the world, Ak makes a case to his peers at the Council of Immortals to grant Santa Claus eternal life through the mystical Mantle of Immortality.

Baum also wrote a short sequel story, A Kidnapped Santa Claus, where a group of Daemons representing various sins frustrated with Claus's positive influence on children kidnap him, forcing his assistants to do the toy run for him and mixing up the deliveries in the process. After rescuing Santa and realizing these mistakes, they soon learn that the children were able to solve the issue by simply exchanging the gifts with each other to ensure everything got to its proper place.

The story is best known from two animated adaptations: A 1985 Rankin/Bass Christmas special that would be their last stop-motion Christmas project that used the Council of Immortals as a framing device and featured many voice actors from ThunderCats and a 2D animated film released in the year 2000 featuring Robby Benson and Jim Cummings playing the title character at different ages. Additionally, in 1996, there was a 24 episode Anime adaptation titled Shounen Santa no Daibouken, with a greater emphasis on the teenaged Santa Claus, though the series is poorly documented online.

These works provides examples of:

Alternative Title(s): The Life And Adventures Of Santa Claus