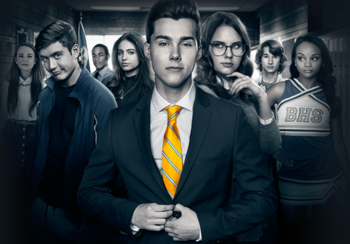 Student most likely to secede.
Advertisement:

Mr. Student Body President is an original series from New Form Digital. It follows Tyler Prendergast (Jeremy Shada), the student body president of Berenger High School, as he and his government attempt to pursue their objectives in the face of their obstructive new Principal Renee Helfrick (Christina Moore). The central joke of the series is that it is a High School comedy in which the characters act as if they are in a Government Procedural.

The series streams on Verizon's go90 service. The first episode aired on September 22, 2016.