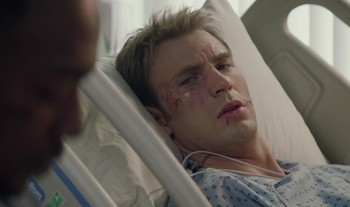 This trope comes into play when the end of a work features a character (usually a hero but occasionally a villain) waking up in hospital room, recovering from injuries sustained during the events of the story, very often a big climactic battle, though whether or not they won is up in the air. One can expect them to be visited by friends and/or family. This trope is frequently used to symbolize healing and relief after a bad experience.

May be a Hospital Surprise. Often the result of a Post-Victory Collapse.