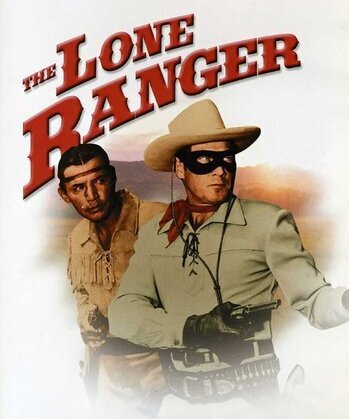 Well... only one of them is a ranger.
"For a guy who complains about being lonely, everyone seems to know him, like him, and are friends with him."
— The Cinema Snob about Dan Burgess in Second Glance
Advertisement:

A character type that has an Informed Attribute relating to whether or not that character is lonely. The reason for this is generally to invoke the Aloof Ally trope or one closely related to it. The idea is simple- aloof, lonely people are different than us, with different values and ways of looking at the world, caused in part by their stunted ability to engage in emotional interaction with others. So having one in a story creates obvious Character Development issues and conflicts, which in turn can make a story more interesting.

The problem with this trope is that it's difficult to write dialogue for loners, well, because they're alone. So by definition, they shouldn't really be acting gabby all the time. Bear in mind, of course, that not all loners are recluses. Some are the type that can feel lonely even in a crowd. But even in that case how much of a "loner" they can really be comes into question if they're initiating half the conversations they take part in and lack any form of social awkwardness.

Note that even if the information comes from characters' talking, Infallible Babble ensures that it's never a case that they are misinformed, or spiteful. All the characters take his "loner" status seriously in the total absence of any evidence of it.

Not to be confused with Ineffectual Loner. For a loner who's more informed than others, try Intelligence Equals Isolation.