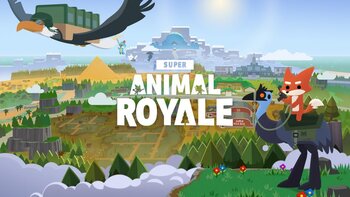 Super Animal Royale is a top down Third-Person Shooter Battle Royale developed by Pixile Studios and published by Modus Games. Playing as a Super Animal, you must fight up to 64 other players to become the last animal standing.

Super Animal World was a theme park island resort, with its main draw being the Super Animal: anthropomorphic animals created via a breakthrough in genetic engineering. Humans would fly over to interact with said animals... until "The Incident", where various Super Animals revolted and tried to take over the island. Now, the park stands completely abandoned of human life, while the pro-human loyalists (S.A.W.) battle against the more rebellious animals (the Super Animal Super Resistance).

Alongside the standard Battle Royale gamemode with solo, duos or squads options, there are a handful of other gamemodes that rotate in and out, such as the class-based Capture the Flag mode SAW vs Rebels, a randomized Mystery Match mode, and a zombie mode... with zombie chickens.

Development began in October 2017, and Alpha testing began by March 2018. An early access version was launched on Steam on December 12, 2018, and a demo was released on January 2019, which allowed players to transfer their progress and unlocked content to the paid version of the game when purchased. The game went fully free-to-play in November 2020, with all players gaining access to cosmetics and customization whilst also offering a paid "Super Edition" that unlocks some exclusive perks.

In addition to the game, there's Super Animal Royale Tonight

, a bi-monthly collection of player-submitted plays presented by Donk Patrick and Howl Michaels.