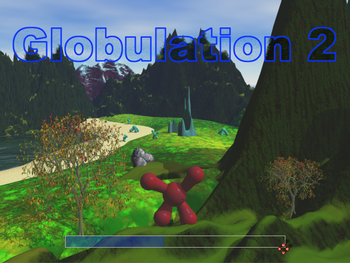 Globulation is a free Real-Time Strategy game where you control globus, X-shaped meat-like beings, and try to defeat the other globus teams. It can be described as StarCraft meets SimCity. It can be downloaded here.

This game averts and subverts many common RTS tropes. It's different from other games of this genre because it has no micromanagement. Instead, you have to give orders of what you want to be done and the units will do it by themselves. E.g. you may set that an inn was supplied by 4 Worker Units (instead of default 2), but at Low priority — then first available workers will be assigned the task of bringing food there, once there will be an idle worker and no waiting tasks with greater priority, until 4 of them are doing it. When one is hungry, it'll break off and go eat — maybe to another inn, if it was closer at the moment, had food and was not overcrowded. Or you make a War Flag zone of needed size set to be patrolled by 4 Warriors upgraded to at least Level 2 — again, it will sit in queue waiting for eligible units not having more important tasks when it's not full. No management more detailed than this.
You can also set areas (forbidden to avoid getting under enemy turrets or preserve seed stock of crops, clear to make sure the paths between Swarm, Inn and crops aren't overgrown), but these don't even have adjustable priority.