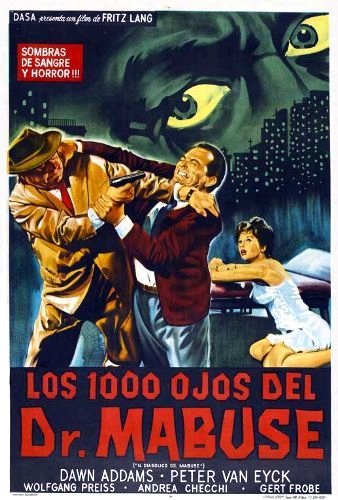 In 1960, Fritz Lang returned to Germany to make his last film, a much-delayed sequel to Dr. Mabuse, the Gambler and The Testament Of Doctor Mabuse.

In this film (in English, The Thousand Eyes of Dr. Mabuse), the methods of the long dead Diabolical Mastermind Dr. Mabuse appear to be being put into practice again in the West Germany of the Wirtschaftswunder. Kommisar Kras of Homicide is investigating a series of mysterious crimes against wealthy guests of the Hotel Luxor. Meanwhile, at the Luxor, an American businessman tries to save a woman in distress...

The film failed to achieve the lasting reputation of the earlier Mabuse films with critics, but was enough of a hit to initiate a new series of Mabuse films by other directors, also featuring Wolfgang Preiss as Mabuse and Gert Fröbe as his police enemy.