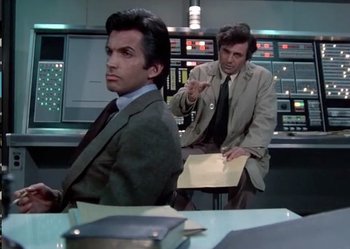 "A Deadly State of Mind" is the sixth and last episode of the fourth season of Columbo.

Dr. Mark Collier (George Hamilton) is a rather slimy psychiatrist who is treating an anxious rich housewife, Nadia Donner (Lesley Ann Warren)note  credited only as Lesley Warren . Slimy, in that he's just generally slimy, but specifically slimy in that he's having an affair with Nadia, his patient.

Nadia invites Mark to a weekend sex vacation at her husband's beach house. Mark shows up at the beach house only to be unpleasantly surprised by Nadia's husband, Carl Donner. Carl has found out about Nadia's affair (just the latest of several) and is not too pleased, threatening to expose Mark's affair. When Mark surprises Carl by attempting to leave with Nadia in tow, Carl attacks him. A scuffle ends with Mark whacking Carl over the head with a fireplace poker and killing him. Mark, thinking quickly, concocts a story. Nadia tells the cops that two robbers attempted to break into the place, and killed Carl in the struggle.

This however does not satisfy Lt. Columbo of the LAPD, who notices some odd details, like the tiny flint stone in the rug, and wonders why Nadia didn't see the headlights of the burglars' car. Columbo also notes that the tire tracks in the Donner's driveway are similar to the tires on Columbo's Peugeot, pointing him to search for a European make of car and finding out early on that Mark has matching tires on his Mercedes.