Dead In The Water 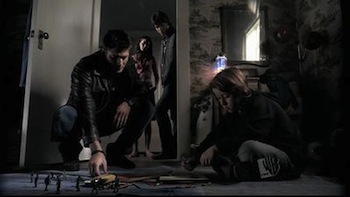 "You're scared. It's okay, I understand. See, when I was your age, I saw something real bad happen to my mom, and I was scared, too."
Sam: "Kids are the best"? You don't even like kids.
Dean: I love kids!
Sam: Name three children that you even know.
[Long pause. Dean scratches his head; Sam starts to walks off]

Sam and Dean investigate a series of mysterious drownings in Wisconsin after coming across the obituary of an 18-year-old girl, Sophie Carlton, who was a varsity swimmer that drowned in the lake. They meet the Sheriff Jake Barr and his daughter, Andrea, and grandson, Lucas. Lucas has not spoken since his father, Bill Carlton's godson, died on the lake, but he has started drawing pictures. Sophie's brother then dies by drowning in a sink, and they realize that the drowning victims are all related to Bill Carlton. Dean asks Lucas to draw what happened, and Lucas draws a picture that they realize is Bill Carlton's house. Bill Carlton drowns in the lake before the Winchesters can question him. Dean asks Lucas for more help, and Lucas draws another house next to a church. Dean and Sam find this home and an older woman who lives there tells them about how her son Peter Sweeney disappeared 35 years ago. When the Sheriff finds out that Dean and Sam are not the Wildlife Service officials they pretended to be, he tells them to leave town. However, Dean is unwilling to leave town without making sure Lucas is okay, and when they reach Lucas' house they find that his mother, Andrea, is being attacked by something in the bath water. Sam manages to pull her out of the water. Then Lucas leads them to a buried bicycle. Dean sends Andrea and Lucas back to the house as they dig up the bike, but Andrea returns when she sees her father, the sheriff, approach with a gun. The Winchesters confront the sheriff with killing Peter while he holds them at gunpoint. The sheriff confesses when he sees his daughter, and admits Peter's body sunk into the lake. In the meantime, Lucas has wandered to the side of the lake and reaches into the lake to get an army man. Peter Sweeney's ghost grabs Lucas by the wrist and pulls him down into the lake. At this point, the sheriff sees Peter's ghost and, while Dean and Sam are diving to find Lucas, Sheriff Jake climbs into the lake and offers himself to Peter. The sheriff is pulled down, and Dean eventually emerges from the water with Lucas.