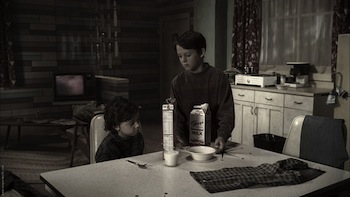 I'm sick of scabetti-ohs.
Sam: He'll always know there are things out there in the dark, never be the same, you know? Sometimes I wish that...
Dean: What?
Sam: I wish I could have that kind of innocence.
Dean: If it means anything, sometimes I wish you could, too.

Dean faces a creature from his childhood who got away and is now stealing the lives of children in Fitchburg, Wisconsin

John Winchester sends Sam and Dean to Fitchburg, Wisconsin, where pneumonia has started to spread among the children, affecting one family at a time. For some reason, none of the kids respond to medical treatment.

During their investigations they find a handprint, which Dean remembers seeing in one of their father's photographs when they were children. It's a Shtriga, an Albanian witch

, which is draining the kids of their life force. It's only weak when it feeds and it hides by disguising itself as a human. It's also one of the few monsters that got away from their father.

After exhausting the few leads they have, they return to the motel where they're staying and find out that the younger boy of the family who runs the place has fallen ill. While Dean gives the upset mother a ride to the hospital, Sam finds a picture in a newspaper from the 1890s of a group of doctors. One of them is the very same doctor who is currently responsible for the pediatrics ward where the sick children are treated.

While arguing with Sam whether or not to use the older brother as bait for the witch, Dean reveals that the reason their father never caught the witch in the first place was because he disobeyed their father and almost got Sam killed by the witch.

Realizing they don't have any alternative, they ask the older brother to act as bait, and he accepts because of the possibility of it saving his brother. They set up a trap and manage to kill the witch, after which all the children are cured from their illness.