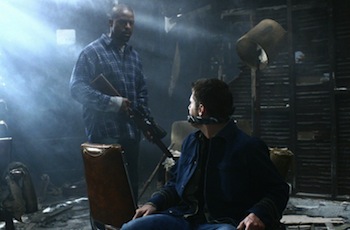 So, Gordy. I know me and Sam ain't exactly your favorite people, but don't you think this is a little extreme?
Dean: Bitch.
Sam: Jerk.

in order to find out more about the Yellow-Eyed Demon's plan, but the hunter Gordon Walker has found out about Sam's secret.

Dean tells Sam the secret their father told him before dying: that if he couldn't save Sam, Dean would have to kill him. Dean wants them to lay low, believing this will be safer for Sam, but Sam wants to find out more about who he is by learning more about the Yellow-Eyed Demon's plans. Sam steals a car and leaves Dean behind, going to Harvelle's Roadhouse for more information. Ash finds another person born in 1983 who had a nursery fire on his 6-month birthday: Scott Carey of Lafayette, Indiana. Unfortunately, Scott was recently murdered. Sam starts investigating, but a young woman named Ava Wilson shows up at his motel. She explains she had a dream about Sam dying, and her dreams come true. Sam tells her about his own psychic abilities and the other people he's met who also developed psychic abilities at age 22. Sam convinces her to help him steal Scott's file from his psychologist. They learn that the Yellow-Eyed Demon was appearing to Scott, and told Scott that people like him would be the Yellow-Eyed Demon's soldiers in an upcoming war.

Meanwhile, after torturing a demon, Gordon Walker learned about the plan for the Special Children to be used by demons as soldiers in an impending war. This demon also told Gordon that Gordon himself knows one of the Special Children: Sam Winchester. Gordon was able to confirm this information and find Sam's location from an unnamed informant at the Roadhouse. Gordon decides to hunt and kill Sam, believing Sam will betray humanity and fight for the demons. Dean had called the Roadhouse, and Ellen gave him Sam's location. Dean gets to the Blue Rose Motel in Lafayette just in time to prevent Gordon from killing Sam, but Dean is knocked unconscious and taken prisoner by Gordon. With help from one of Ava's premonitions, Sam is able to avoid Gordon's trap and save Dean, while the police arrive and arrest Gordon based on an anonymous tip left by Sam. When the brothers check in on Ava, they discover she's missing, her fiance is dead and there's evidence of demon activity in the form of sulfur on the windowsill.

For this episode = 2 humans, including another Special Child.