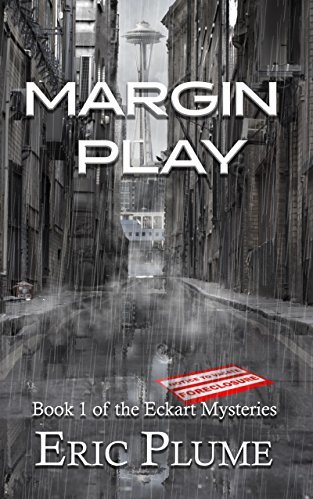 Margin Play is the first novel written by Eric Plume, featuring Amber Eckart, a Private Investigator and the owner of a struggling PI firm in Seattle. It was first published in 2013.

When Amber's hired by a lawyer from the largest, most respected law firm in the area to investigate a dodgy foreclosure, she finds that the situation is far more twisty and complicated that she expected — and she was expecting it to be twisty and complicated to start with. Assisted by her employees Julian Wu, receptionist and apprentice investigator; and Izzy Alphabet, computer guru, research assistant and journeyman investigator; and by an old friend from college, Drake Albie, she starts trying to untangle the threads and finds a snarl of fraud, extortion, deception and corruption surrounding a multi-million-dollar land development deal.

Throw some Russian mobsters, Russian gangs, a freelance enforcer, and a sweet little old lady with a gun into the mix, and stir well.