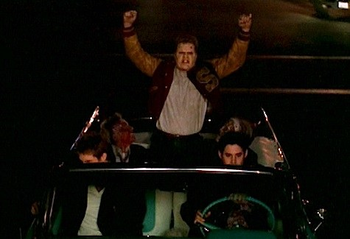 "Did I mention I'm having a strange night?"
Faith: "You up for it?"
Xander: "Oh, I'm up. I'm suddenly very up. It's just..um..I've never been up with people before."
Faith: "Just relax. And take your pants off."
Xander: "Those two ... concepts are... antithetical."
Faith: "Don't worry. I'll steer you around the curves."
Advertisement:

While the Scooby Gang slaughters demons in an underground nest, Xander manages to get himself hurt. Buffy Summers suggests he stay out of the fighting. Xander is desperate to find his place after his breakup with Cordelia Chase and the alienation from his friends. When another student throws him a football, he misses and it hits Jack O'Toole's lunch, resulting in Jack calmly threatening to beat him up. Cordelia, having witnessed the entire event, tells Xander he is useless: "You're the Zeppo". Meanwhile, Giles informs Buffy that the end of the world is near. An order of demons called the Sisterhood of Jhe is planning to reopen the Hellmouth.

After a discussion with Oz about what makes someone cool, Xander shows up at school driving a 1957 Chevrolet Belair convertible, borrowed from his uncle Rory. Meeting Buffy and Willow Rosenberg, he says he is now "car guy" and looks forward to his new role within the group... Only to find that he's tasked with nothing more than getting donuts for the rest of the Scooby gang, who are doing research at the library. While at the donut shop, Xander encounters Cordelia who delightfully rubs his nose in the fact that all he does now is simple errands. Just then a girl who likes his car starts to flirt with Xander and wants to go for a ride. Xander, eager to try and get one-up on Cordelia, agrees once he's dropped the donuts off.

At the library, Buffy, Willow and Giles are researching. Meanwhile, Oz is in werewolf mode and is freaking out in his cage. Willow thinks it's because he can sense trouble. With the Watchers Council refusing to speak with him, Giles leaves to try to contact "the Spirit Guides who exist out of time," who he hopes will provide information on the Sisterhood of Jhe.

At the Bronze that night, Xander is still entertaining his new female acquaintance, however it's clear that she's far more interested in the car than she is in him. Xander meets Angel, who is looking for Buffy because he is concerned about the Sisterhood of Jhe, but refuses Xander's offer of help, telling him it would be safer if he keeps out of the way. When leaving, he rear-ends a parked car. Jack O'Toole gets out of it and threatens Xander with a knife. A cop who knows Jack shows up, but Xander covers for Jack. Surprised but grateful, Jack offers to let Xander be their 'wheel-man' due to his having a car, and tells them they need to go and pick up his friends (as the car that Xander rear-ended isn't actually his). Much to Xander's surprise, it turns out that Jack's friends are all dead and they go to the graveyard where Jack raises them. Xander meets Giles, just as the latter is leaving, having failed to secure the help of the Spirit Guides and asks if he needs any help (desperate to extricate himself from the escalating trouble he's found himself in) but Giles repeats the earlier comments that Xander is best out of the way. Jack finishes raising his three friends and they leave with Xander driving.

Buffy visits Willy the Snitch and finds that the Sisterhood of Jhe have been there already, and thoroughly wrecked it. Willy, who's been beaten up, reveals that the Sisterhood are planning to open the hellmouth that very night and advises Buffy that she should find Angel and consider how to spend her last night on earth. In the library, werewolf Oz is going crazy and the gang are forced to tranquilize and move him.

Jack and his zombie friends drive around town with Xander, who is getting more and more worried as they discuss their deadly activities and plans. Eventually they decide to 'bake a cake' and start gathering supplies by robbing a hardware store. While the boys are getting the supplies from a hardware store, Xander spots Willow leaving the magic shop however she quickly runs off after she, thinking the world may end, tells him she loves him. Xander decides enough is enough and tries to run off, however Jack and the others aren't willing to let him do that. They decide that the best way to make him part of the group is to kill him and raise him, since he'll need to be dead to be 'initiated'. Xander points out that Jack isn't dead, only for Jack to lift his shirt to reveal several bullet holes (having been raised within minutes of being killed in a drive-by shooting). Xander then makes a run for it, and encounters Faith, who is fighting off one of the Sisterhood. After rescuing her, the two head to her motel room. When there, the rush of the battle makes her feel horny, and she and Xander end up having sex. She kicks him out, clothes in hand, quickly after. Attempting to process everything that has happened on this very eventful night for him, Xander gets into the car and sees the supplies that Jack and the gang were collecting and realizes that they're building a bomb.

Xander drives back to the hardware store to find Jack and his gang long gone, laden with more than enough supplies. He heads to Angel's mansion to find Buffy, and finds the two having yet another argument about their feelings. Realizing it's a bad moment, he leaves. Xander then heads to the library to find Giles only to run into the zombies again. They give chase to the car, with one of them holding on to the side. Xander demands to know where the bomb is, and the zombie reveals its in Sunnydale High's boiler room. Before he reveals how to disarm it, a mailbox takes his head off. Xander then heads for the school, with Jack and his gang in hot pursuit.

In the library, the Hellmouth has been opened and a giant, multi-tentacled monster has emerged. Buffy, Faith, Willow, Giles and Angel prepare to fight it, as Xander and the zombies run past (with only one of them noticing, and exclaiming "Wow"). During the chase, one of the zombies is crushed by a soda machine while the last of Jack's friends is ripped apart by members of the Sisterhood who arrive to attack.

Meanwhile, Buffy and the others fight with all their strength in the library to try and close the Hellmouth and save the world.

Xander heads down to the boiler room where the bomb is, and finds Jack. Jack shows up, and after a fight between the two, Xander asks Jack who is more afraid of death. Jack points out that he's already dead, but Xander points out that "'walking around drinking beer with your buddies'-dead is a lot different from 'being blown up and swept up by a janitor'-dead." When Jack confronts Xander about him dying, Xander merely remarks, "I like the quiet" and stares at him calmly. Jack defuses the bomb with seconds to spare. Xander tells Jack he doesn't want to see Jack around school anymore, then leaves by a side door. Jack promises revenge against Xander the instant his back is turned, as he moves to leave by another door... only for Werewolf Oz to jump out and tear him to pieces.

The next day, the Scoobies are sitting at a bench reminiscing about the previous night's battle in hushed tones. Buffy is wearing a sling. We learn that Angel was knocked out during the fight, and Buffy feared he was dead. Oz isn't eating anything as he feels strangely full for some reason. Xander happens by, but says nothing about his own adventure. Leaving the Scoobies, he meets Cordelia who once again taunts him about being left out of his circle of friends. But instead of lashing back at her, Xander just smiles and quietly walks by the bewildered Cordelia, now a better and more confident person.