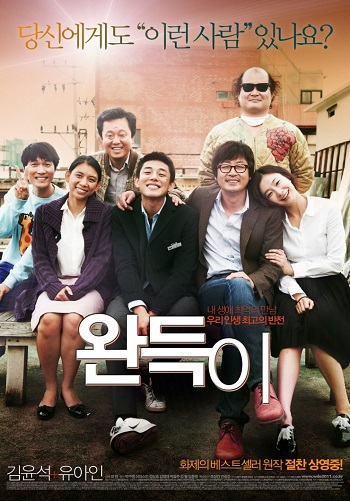 Punch (완득이) is a 2011 film from South Korea, directed by Lee Han. Do Wan-Deuk is an 18-year-old student of indifferent academic accomplishment. His father Gak-seol is a hunchback. Gak-seol and his partner Min-gu, who is mentally handicapped, used to have a dance act in a cabaret, but the cabaret closes, and Gak-seol and Min-gu are left to struggle for a more difficult living dancing and selling trinkets in open-air markets. The Do family is poor, and Wan-deuk is often left to take care of himself while his father and "uncle" Min-gu go on the road to try and earn money.

Meanwhile, Wan-deuk goes to church and prays to God to kill his teacher, Lee Dong-ju. Dong-ju is gruff, abrasive, and insulting to his students, and seems to be fond of whipping out the cane to discipline students. However, beneath the hard exterior he is conscientious and cares about his students. He takes a particular interest in Wan-deuk, probably because Wan-deuk is his next-door neighbor as well as his student. One day Dong-ju comes over and tells Wan-deuk that he has found in the city register the name and location of Wan-deuk's Missing Mom, Lee Suk-gi, who has been gone since Wan-deuk was a baby. She is an immigrant from the Phillippines who left the Do home as soon as she was finished breast-feeding him. Wan-deuk and his father must then deal with the complication of Suk-gi coming back into their lives.

Other characters include a hostile, irritating neighbor, the neighbor's attractive sister Lee Ho-jeong, and Jeong Yun-ha, the prettiest girl and best student in Dong-ju's class, who takes a liking to Wan-deuk.