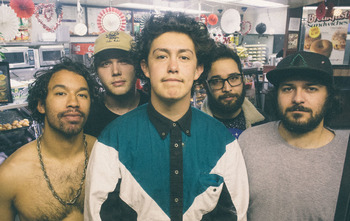 Hobo Johnson and the Lovemakers are a musical group from Sacramento, California whose musical style is well, hard to pin down. Hobo Johnson's (real name Frank Lopes Jr.) confessional songwriting, strangely affecting physical presence, and slam poetry-influenced talk-rapping defines the band and its sound. He is backed by the Lovemakers, who all play analogue instruments, leading to a group that resembles a traditional Five-Man Band rock band in composition if not in sound.

Their music consists of rambling, often sad or self-deprecating, confessional lyrics juxtaposed with humor and overlain on a sparse musical background. Hobo delivers the lines in a spoken-word style interspersed with SHOUTED PASSAGES and asides or conversational vignettes that blur the line between song, introduction and Studio Chatter. Listening to the songs is a bit like having a one-on-one conversation with an earnest and talkative but deeply unstable person.

Hobo Johnson began making music in 2015, but the band began to attract attention in 2018 when the backyard video they submitted for NPR Tiny Desk Concerts went viral. Since then they've signed to a major label and gone on a world tour. They have four albums:

Hi, I'm Hobo Johnson, these are my tropes: